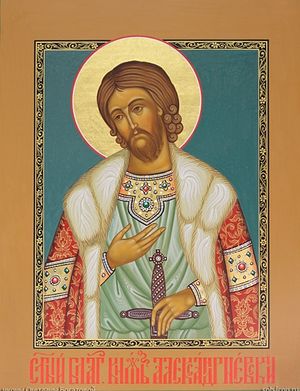 “St. Alexander Nevsky was Russia’s “knight in shining armor.” His reputation as a man of exceptional valor and surpassing virtue inspired a visit by a German commander who told his people when he returned: “I went through many countries and saw many people, but I have never met such a king among kings, nor such a prince among princes.” The Russians called him their “prince without sin.” From OrthodoxChristian.com

A Christian of Italian ancestry, Victor served as a soldier in the city of Damascus, Syria, during the reign of Emperor Marcus Aurelius (of the Antoninus Dynasty, 161–180 AD). When the Emperor decreed that Christians be persecuted, his military commander Sebastian demanded that Victor renounce Christ and offer a sacrifice to the idols. Sebastian said, “You are a soldier of our king, and you must follow his orders.” “No,” said Victor. “I am now a soldier of the Heavenly King. I now serve him alone, and I scorn the abominable idols!” From Russian Orthodox Cathedral of St. John The Baptist